A beginner’s guide to the Write Skew anomaly, and how it differs between 2PL and MVCC

Unlike SQL Server which, by default, relies on the 2PL (Two-Phase Locking) to implement the SQL standard isolation levels, Oracle, PostgreSQL, and MySQL InnoDB engine use MVCC (Multi-Version Concurrency Control), so handling the Write Skew anomaly can differ from one database to the other.

However, providing a truly Serializable isolation level on top of MVCC is really difficult, and, in this post, I’ll demonstrate that it’s very difficult to prevent the Write Skew anomaly without resorting to pessimistic locking.

For the upcoming examples, we are going to use the following database entities:

Our company IT department has a budget of 100 000 per month. This must accommodate all salaries and bonuses so that we never go over budget. Alice, the company CEO, decides to give a bonus to all the employees in the IT department because they’ve done a very good job with the latest product release. However, the bonus must not exceed the budget. Meanwhile, Bob, the company HR, has finally managed to hire Carol, who is a great developer so we can afford to pay her as much as our budget allows us.

To illustrate how the Write Skew anomaly can break Serializability, consider the following steps:

Obviously, one of these two transactions needs to fail to preserve the serializable transaction schedule. This anomaly is called a Write Skew, and we are going to see how this phenomenon is handled by various RDBMS.

There are two types of strategies a database can use in order to prevent data integrity phenomena: either it tries to prevent conflicts by using a pessimistic locking or it allows conflicts to happen, but then it needs to detect them through optimistic concurrency control.

All the upcoming tests are available on GitHub, so you can easily run them on your favorite RDBMS and verify if a particular isolation level allows a phenomenon that it should normally prevent.

In Two-Phase Locking, locks can be acquired either at the row-level, to prevent lost updates, read and write skews, or they can be acquired for a range of rows so that phantom reads are prevented.

Next, we are going to see how various databases using the two-phase locking mechanism can prevent our Alice-and-Bob budget problem.

MySQL has multiple storage engines, but we are only interested in the transactional InnoDB engine which is also the default storage engine since version 5.5. Even if InnoDB uses MVCC at its core, for the Serializable isolation level, MySQL acquires a shared physical lock on every row or range of rows that are selected by a given SQL query. Because every table is a clustered index in MySQL, InnoDB uses the underlying index structure to provide records, gaps or even next-key locks.

When rerunning our use case on MySQL Serializable isolation level, the following outcome is registered: 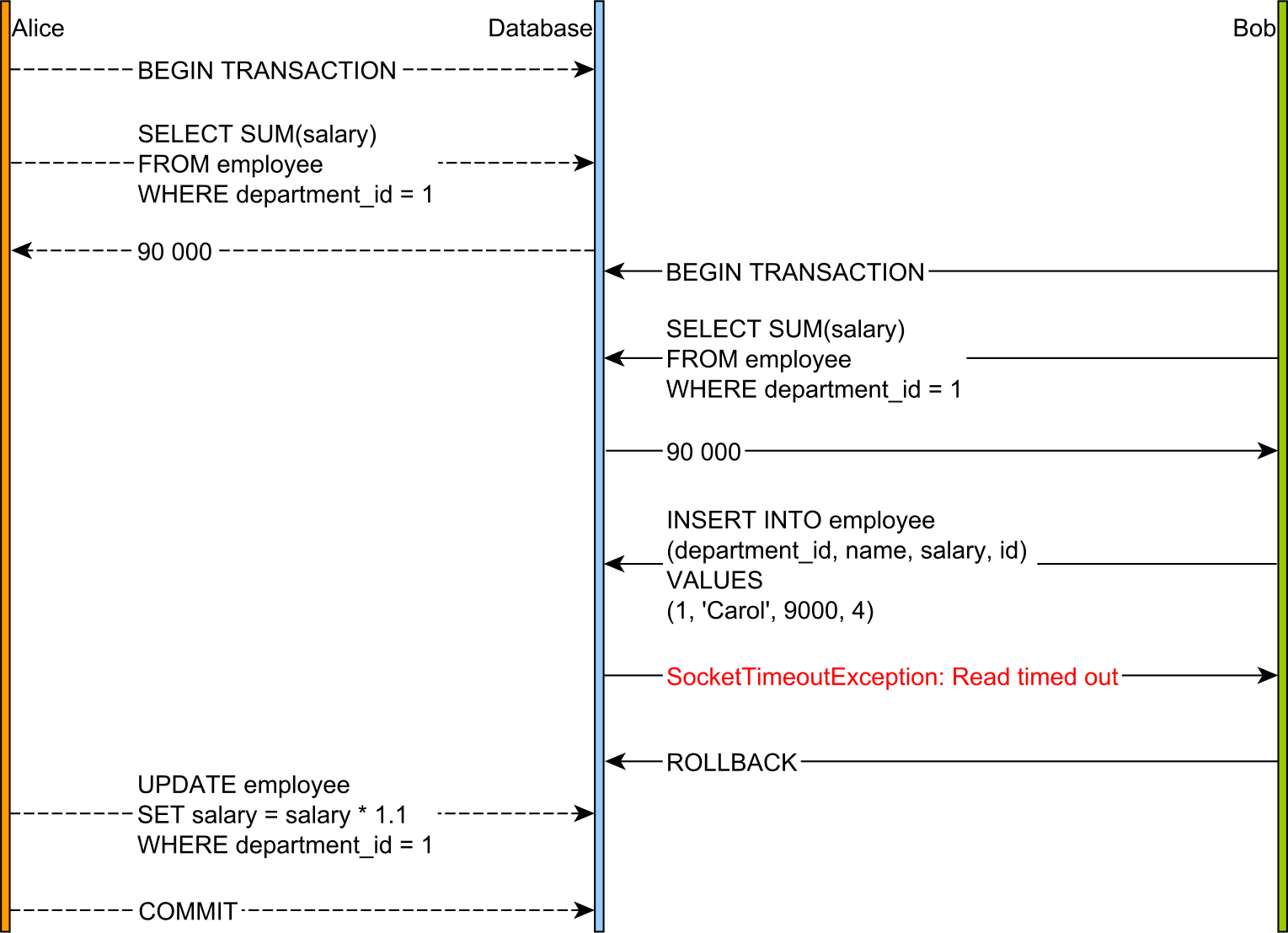 As previously stated, 2PL employs a conflict prevention mechanism, so Bob’s INSERT statement is blocked because Alice is holding a shared predicate lock that spans over all employees that are contained within the IT department. Bob’s transaction waits for a given period of time, and, because Alice’s transaction is still holding the lock, Bob’s statement fails with a timeout exception.

SQL Server uses 2PL by default so, if you want the lock acquisition to fail fast, you can use the NOWAIT directive.

However, everything has a price, and MVCC is no different. MVCC is built on the assumption that Readers should not block Writers, and Writers should not block Readers. For this reason, shared locks are no longer employed, and transactions are allowed to modify entries that other concurrent transactions might have read in the meanwhile. So, MVCC takes an optimistic approach to resolve data integrity issues since conflicts can occur, but they need to be discovered prior to committing a given transaction.

Even if MVCC uses less locking than 2PL, exclusive locks are still acquired every time we modify a record since otherwise, dirty writes might happen, and atomicity would be compromised.

Compared to Serializable, Snapshot Isolation is a weaker consistency model since it can prevent Dirty Reads, Lost Updates and Read Skews, but it cannot prevent Write Skews.

That being said, Snapshot Isolation is more or less on the same level as Repeatable Read, as illustrated by Kyle Kingsbury’s consistency hierarchy diagram.

Oracle offers two MVCC-based isolation levels: Read Committed and Serializable, so there is no 2PL-based concurrency control. Although Oracle calls it Serializable, the highest isolation level is actually a variant of Snapshot Isolation which is prone to Write Skew anomaly.

Unlike 2PL, there is no standard way of implementing isolation levels on top of MVCC, so each database uses its own implementation which tries to prevent as many anomalies as possible.

For this reason, it’s worth checking every use case because there might be edge cases when the MVCC algorithm cannot detect a Write Skew which would have been prevented in 2PL.

Unlike other databases engines using MVCC, PostgreSQL goes one step further and implements a Serializable Snapshot Isolation (SSI) level, which is a very complex concurrency control mechanism that can detect Write Skews.

For our example, PostgreSQL 9.5 is able to detect the Write Skew phenomenon when using an aggregate function over all employee records in the IT department: 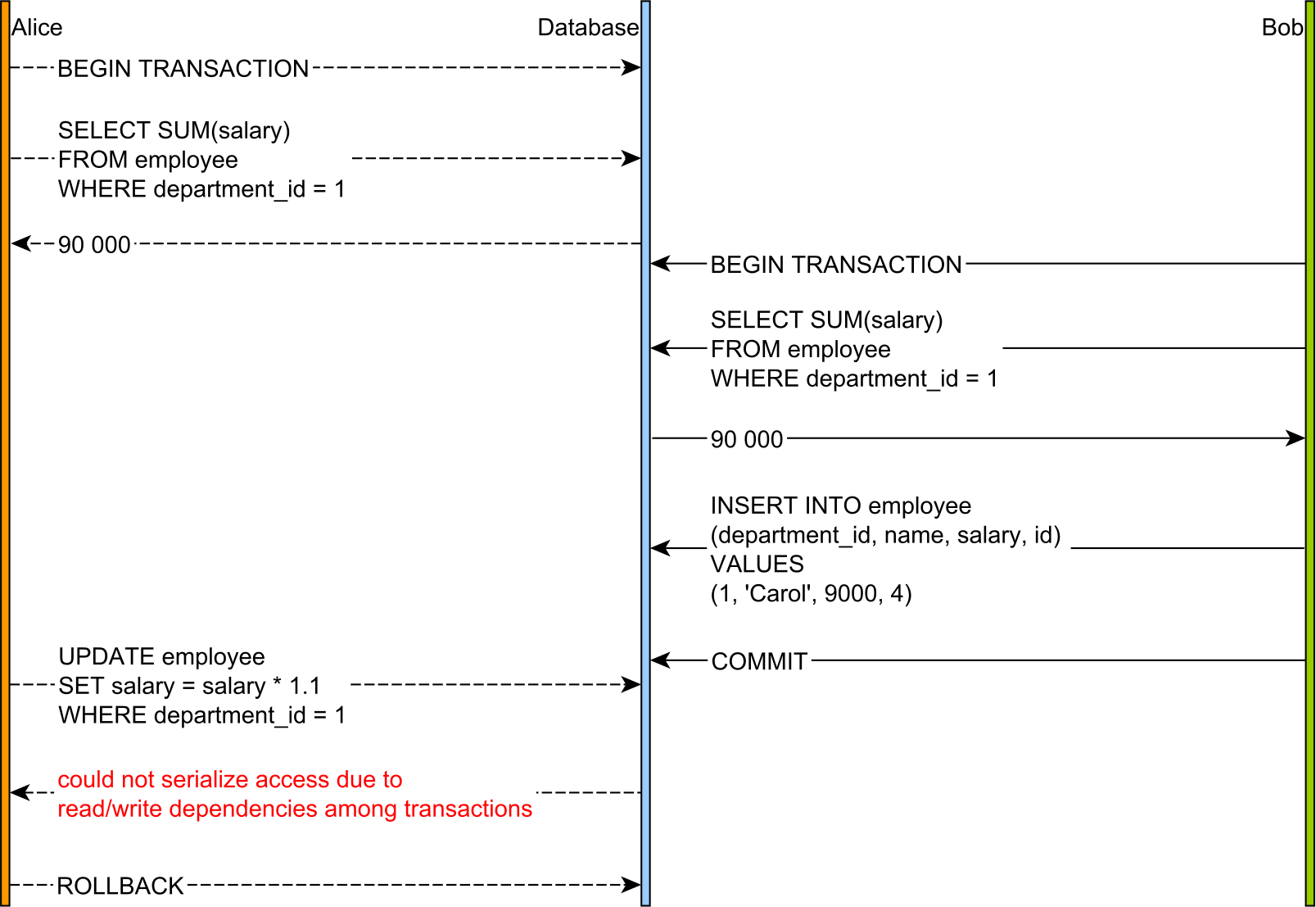 PostgreSQL SSI manages to detect the Write Skew since Alice’s transaction is rolled back due to a serialization failure.

Returning a result set instead of an aggregated result value

Let’s see what happens if we select the salaries as a result set instead of an aggregated value: 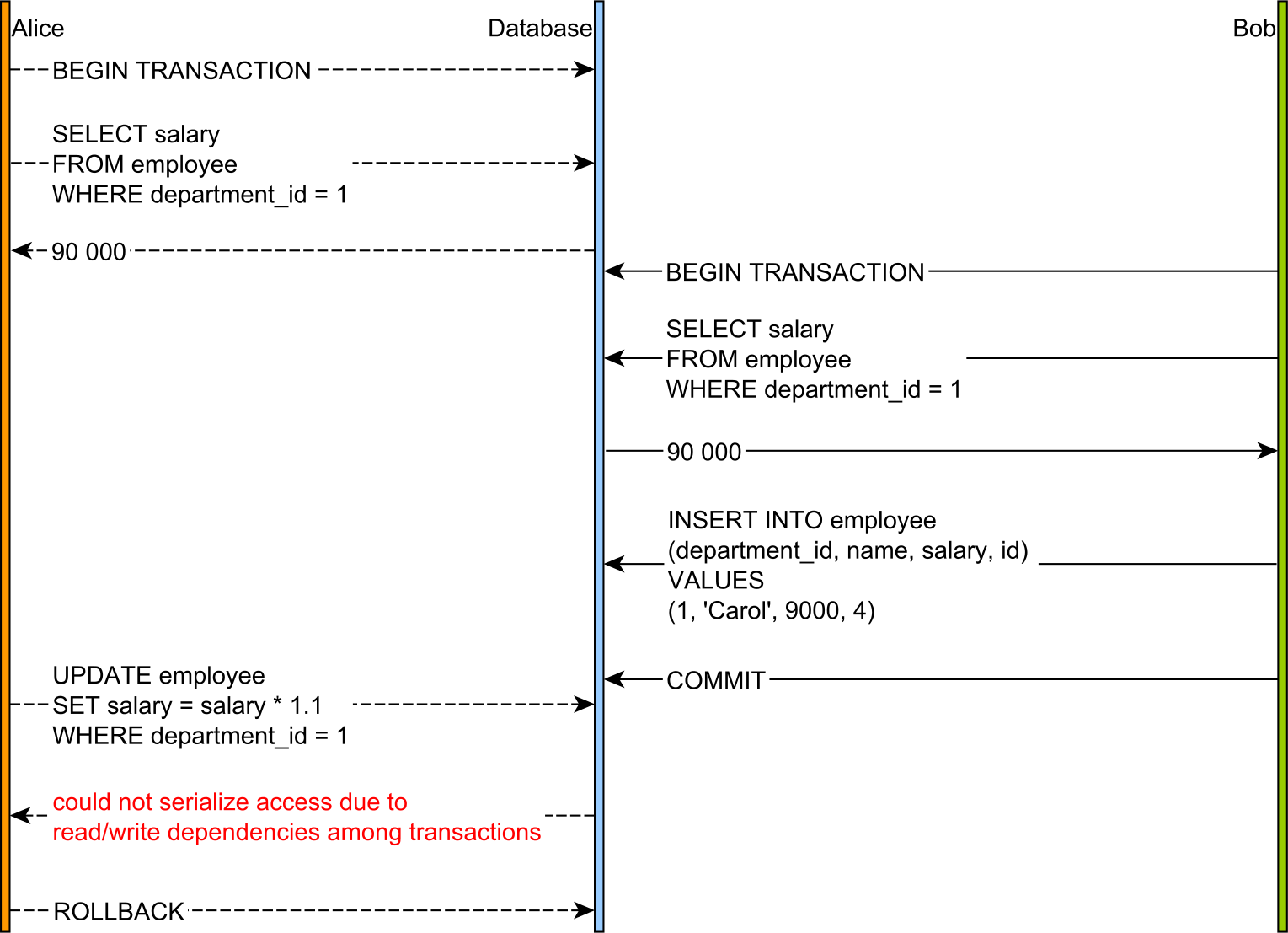 PostgreSQL SSI manages to detect the Write Skew, and Alice’s transaction is rolled back.

Returning a result set only in Alice’s transaction

However, if just Alice is reading the employee records in the IT department while Bob just issues the insert statement without reading the current employees, PostgreSQL does not prevent the second write anymore. 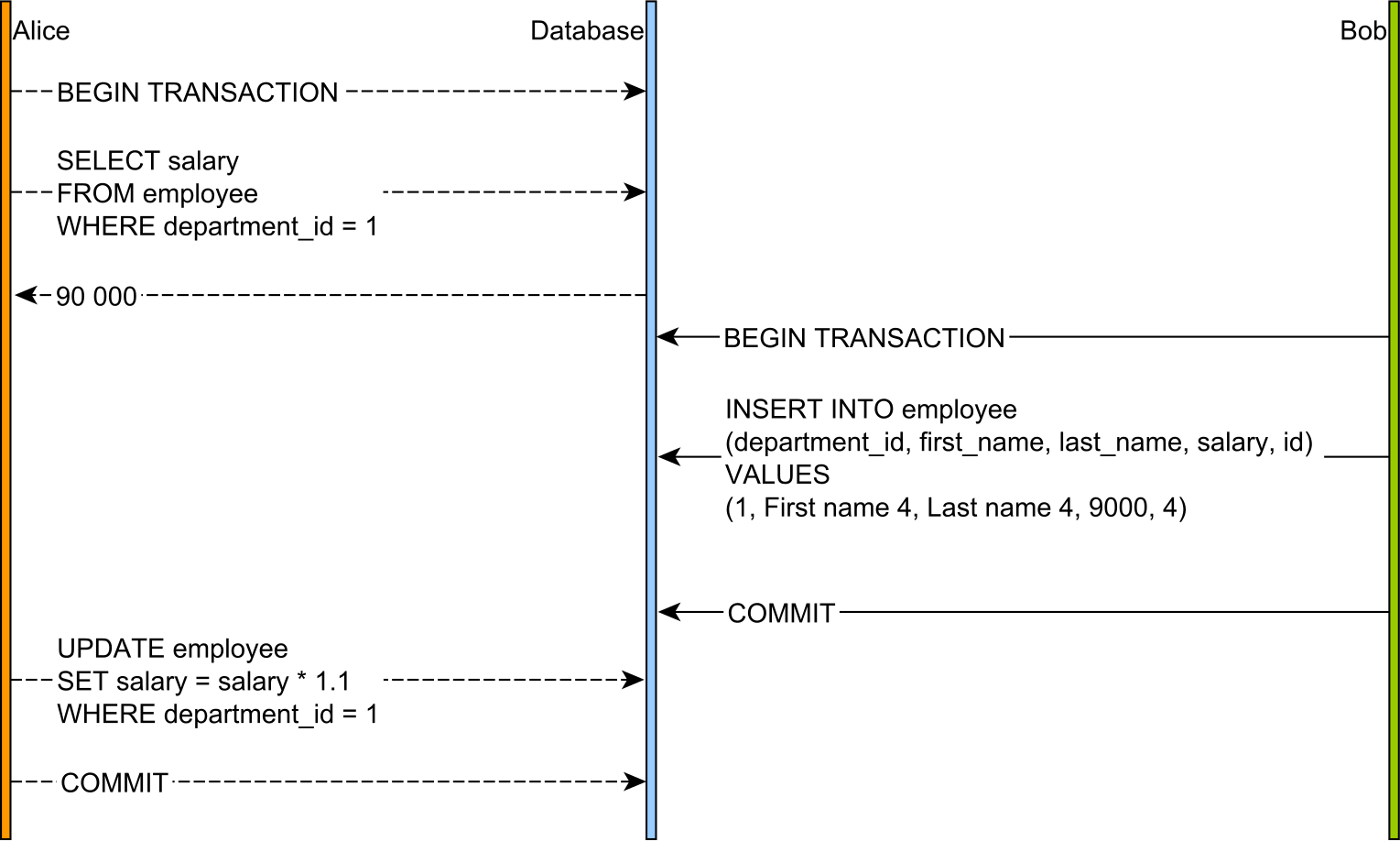 Therefore, this is not an anomaly from the database concurrency control perspective, but it might be from our application logic perspective, so keep that in mind.

All these uses cases are properly prevented by MySQL since the shared predicate lock prevents Bob from acquiring an exclusive lock in order to insert a new row in the same range of records that Alice has already selected. But due to locking, MySQL offers Strict Serializability (Serializability + Linearizability), hence our issue is prevented.

MVCC is a great concurrency control mechanism, but, because it does not use pessimistic Predicate or Range locks, it must detect anomalies by inspecting the currently running transaction schedule. This is a very complex task, and there might be edge cases when a database engine might not detect some anomaly that would otherwise be prevented by a 2PL-based concurrency control mechanism.

Compared to 2PL, which has been around since late 1970s, the Serializable Snapshot Isolation algorithm is rather new, being published in 2008 and first introduced into Postgres 9.1 (2011). There is a lot of research undergoing in the field of database and distributed systems, and, in the future, we might benefit from even more reliable optimistic concurrency control mechanisms. Meanwhile, it’s better to understand the tradeoffs and limitations of the current implementations to ensure that data integrity is not being compromised.

My next article will demonstrate how you can overcome Write Skew anomalies when the underlying MVCC-based Serializable isolation level cannot prevent it properly.

← Why should not use the AUTO JPA GenerationType with MySQL and Hibernate
How does database pessimistic locking interact with INSERT, UPDATE, and DELETE SQL statements →