Posted on December 2, 2019 by vladmihalcea

How does the 2PL (Two-Phase Locking) algorithm work

The 2PL (Two-Phase Locking) algorithm is one of the oldest concurrency control mechanisms used by relational database systems to guarantee data integrity.

In this article, I’m going to explain how the 2PL algorithm works and how you can implement it in any programming language.

Before we start discussing the 2PL algorithm implementation, it’s very important to explain how the read and write locks work.

A read or share lock prevents a resource from being written while allowing other concurrent reads.

A write or exclusive lock disallows both read and write operations on a given resource.

For more details about how you can acquire read or write locks with JPA and Hibernate, check out this article.

Locks alone are not sufficient for preventing conflicts. A concurrency control strategy must define how locks are being acquired and released because this also has an impact on transaction interleaving.

For this purpose, the 2PL protocol defines a lock management strategy for ensuring Strict Serializability.

The 2PL protocol splits a transaction into two sections:

For a database transaction, the expanding phase means that locks are allowed to ve acquired from the beginning of the transaction until its end, while the shrinking phase is represented by the commit or rollback phase, as at the end of a transaction, all the acquired locks are being released.

The following diagram shows how transaction interleaving is coordinated by 2PL: 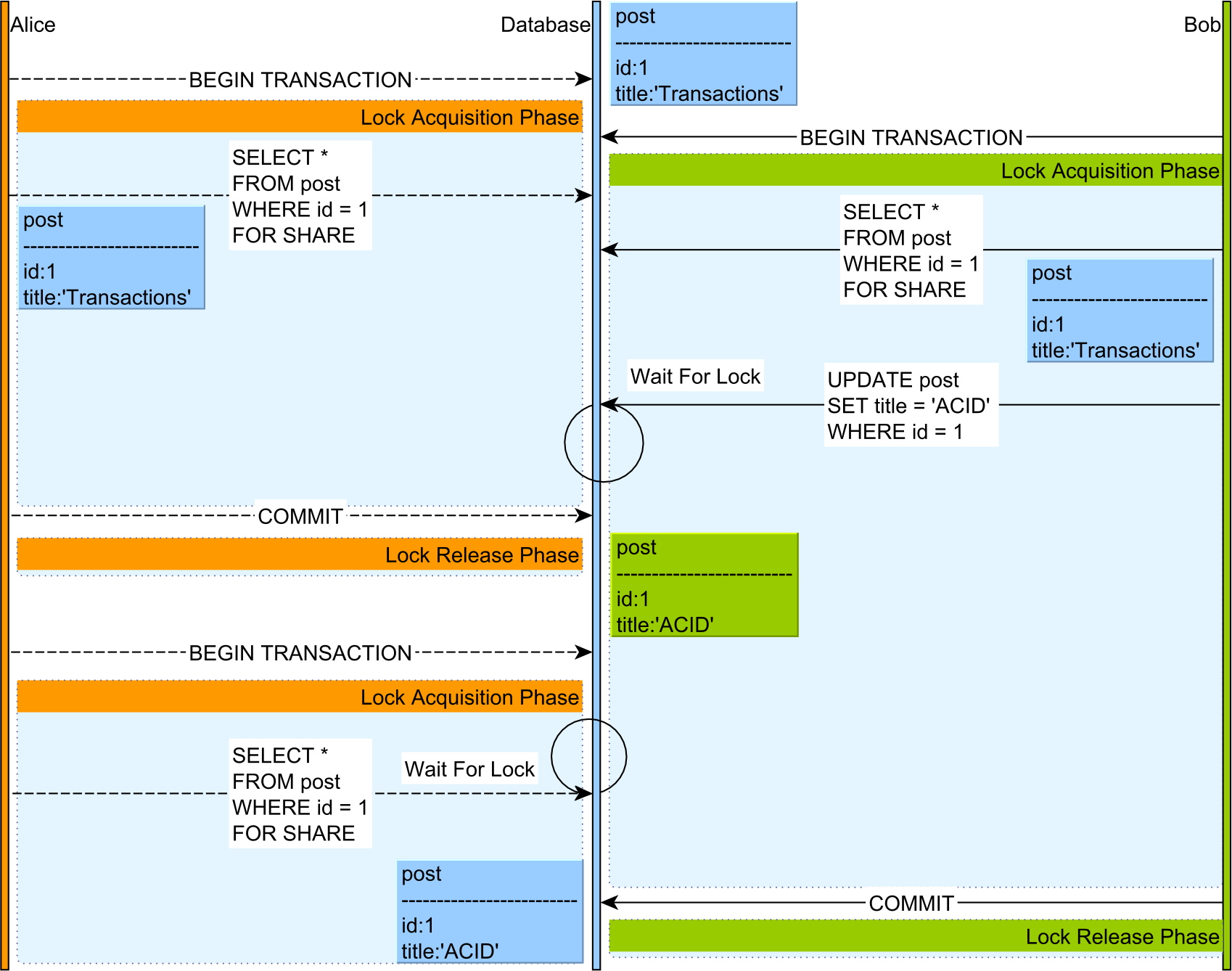 However, Serializability does not take the flow of time into consideration. On the other hand, Linearizability implies time-based ordering. For example, a system is linearizable if any subsequent read will reflect the changes done by a previous write operation. For more details about Lienearizbaility, check out this article.

The 2PL (Two-Phase Locking) algorithm was introduced in 1976 in The Notions of Consistency and Predicate Locks in a Database System paper by Kapali Eswaran and Jim Gray (et al.), which demonstrated that Serializability could be obtained if all transactions used the 2PL algorithm.

Nowadays, only SQL Server uses the 2PL algorithm by default. However, if you set the READ_COMMITTED_SNAPSHOT orALLOW_SNAPSHOT_ISOLATION MVCC modes at the database level, then SQL Server will switch to using MVCC.

Even if the InnoDB MySQL storage engine is MVCC-based when switching to the Serializable isolation level, the database will use the 2PL algorithm since locks will be acquired on both read and write operations.

For this reason, it’s very important to understand how the 2PL algorithm works and that it can guarantee Strict Serializability.