Database transactions are defined by the four properties known as ACID. The Isolation Level (I in ACID) allows you to trade off data integrity for performance.

The weaker the isolation level, the more anomalies can occur, and in this article, we are going to describe the Non-Repeatable Read phenomenon.

If one transaction reads a database row without applying a shared lock on the newly fetched record, then a concurrent transaction might change this row before the first transaction has ended. 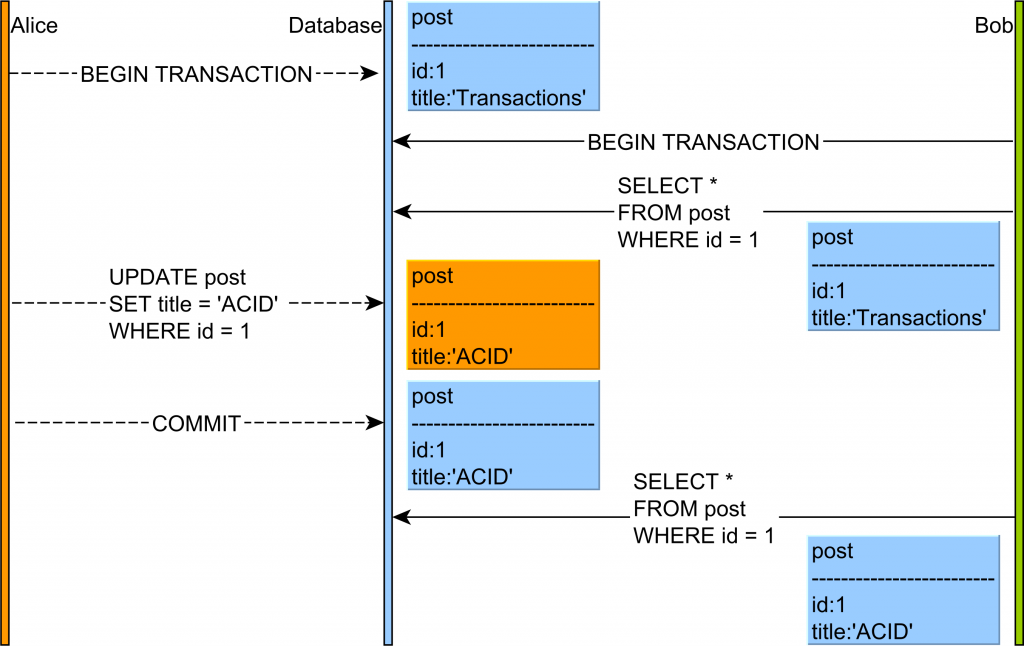 In the diagram above, the flow of statements goes like this:

This phenomenon is problematic when the current transaction makes a business decision based on the first value of the given database row (a client might order a product based on a stock quantity value that is no longer a positive integer).

How the database prevents it

If a database uses a 2PL (Two-Phase Locking) and shared locks are taken on every read, this phenomenon will be prevented since no concurrent transaction would be allowed to acquire an exclusive lock on the same database record.

Most database systems have moved to an MVCC (Multi-Version Concurrency Control) model, and shared locks are no longer mandatory for preventing non-repeatable reads.

By verifying the current row version, a transaction can be aborted if a previously fetched record has changed in the meanwhile.

Repeatable Read and Serializable prevent this anomaly by default. With Read Committed, it is possible to avoid non-repeatable (fuzzy) reads if the shared locks are acquired explicitly (e.g. SELECT FOR SHARE).

Any successive query returning the same database row is going to use the very same object that was previously cached. This way, the fuzzy reads may be prevented even in Read Committed isolation level.

Nevertheless, preventing this anomaly is fairly simple. All you need to do is use a higher isolation level like Repeatable Read (which is the default in MySQL) or Serializable. Or, you can simply lock the database record using a share(read) lock or an exclusive lock if the underlying database does not support shared locks (e.g. Oracle).