Posted on January 4, 2017 by vladmihalcea

For synthetic Primary Keys, we need to use a generated entity identifier, which is supported by JPA through the use of the @GeneratedValue annotation.

There are four types of generated identifier strategies which are defined by the GenerationType enumeration:

The AUTO identifier generator strategy chooses one of the other three strategies (IDENTITY, SEQUENCE or TABLE) based on the underlying relational database capabilities.

While IDENTITY maps to an auto-incremented column (e.g. IDENTITY in SQL Server or AUTO_INCREMENT in MySQL) and SEQUENCE is used for delegating the identifier generation to a database sequence, the TABLE generator has no direct implementation in relational databases.

This post is going to analyze why the TABLE generator is a poor choice for every enterprise application that cares for performance and scalability.

To understand how the TABLE generator works, consider the following Post entity mapping:

The following output is obtained when inserting a new Post entity:

Although it is a portable identifier generation strategy, the TABLE generator introduces a serializable execution (the row-level lock), which can hinder scalability.

Compared to this application-level sequence generation technique, identity columns and sequences are highly optimized for high concurrency scenarios and should be the preferred choice

The cost of transactional row-level locks when emulating a sequence

Because of the mismatch between the identifier generator and the transactional write-behind cache, JPA offers an alternative sequence-like generator that works even when sequences are not natively supported.

A database table is used to hold the latest sequence value, and row-level locking is employed to prevent two concurrent connections from acquiring the same identifier value.

A database sequence is a non-transactional object because the sequence value allocation happens outside of the transactional context associated with the database connection requesting a new identifier.

In a JTA environment, the currently running transaction must be suspended, and the sequence value is fetched in a separate transaction. The JTA transaction manager has to do additional work to accommodate the transaction context switch, and that can also have an impact on the overall application performance.

Without any application-level optimization, the row-level locking approach can become a performance bottleneck if the sequence logic is called way too often.

To evaluate the concurrency cost of each identifier generators, the following test measures the time it takes to insert 100 Post entities when multiple running threads are involved.

The first relational database system under test supports identity columns, so it is worth measuring how the identifier and the TABLE generator compete because the Hibernate IDENTITY generator does not support JDBC batching for INSERT statements, as explained in this article. Each test iteration increases contention by allocating more worker threads that need to execute the same database insert load. 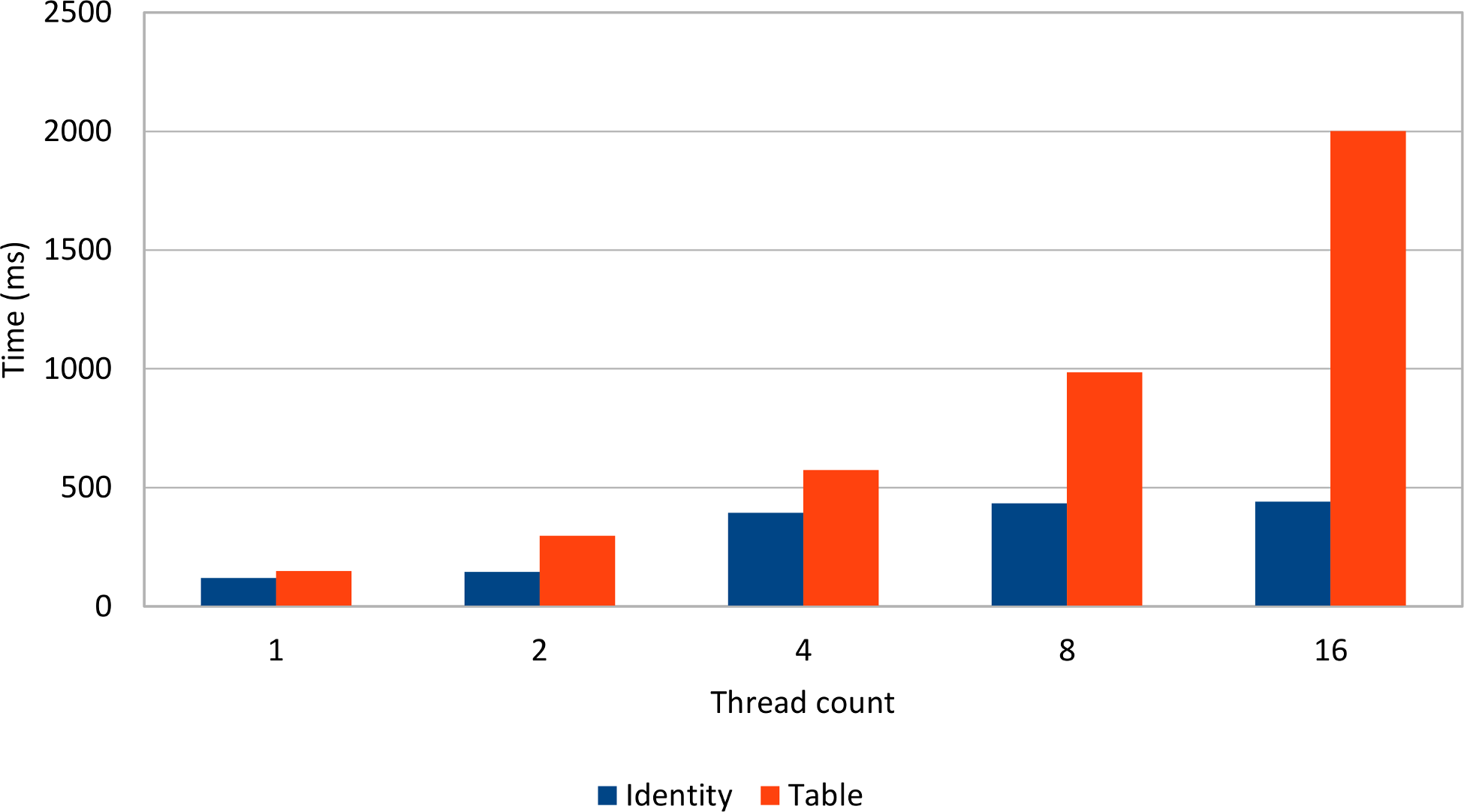 Even if it cannot benefit from JDBC batching, the IDENTITY generator still manages to outperform the TABLE generator, which uses a pooled optimizer with an increment size of 100.

The more threads are used, the less efficient the table generator becomes. On the other hand, identity columns scale much better with more concurrent transactions. Even if does not support JDBC batching, native identity columns are still a valid choice, and, in future, Hibernate might even support batch inserts for those as well.

Running the same test against a relational database supporting sequences, the following results are being recorded: 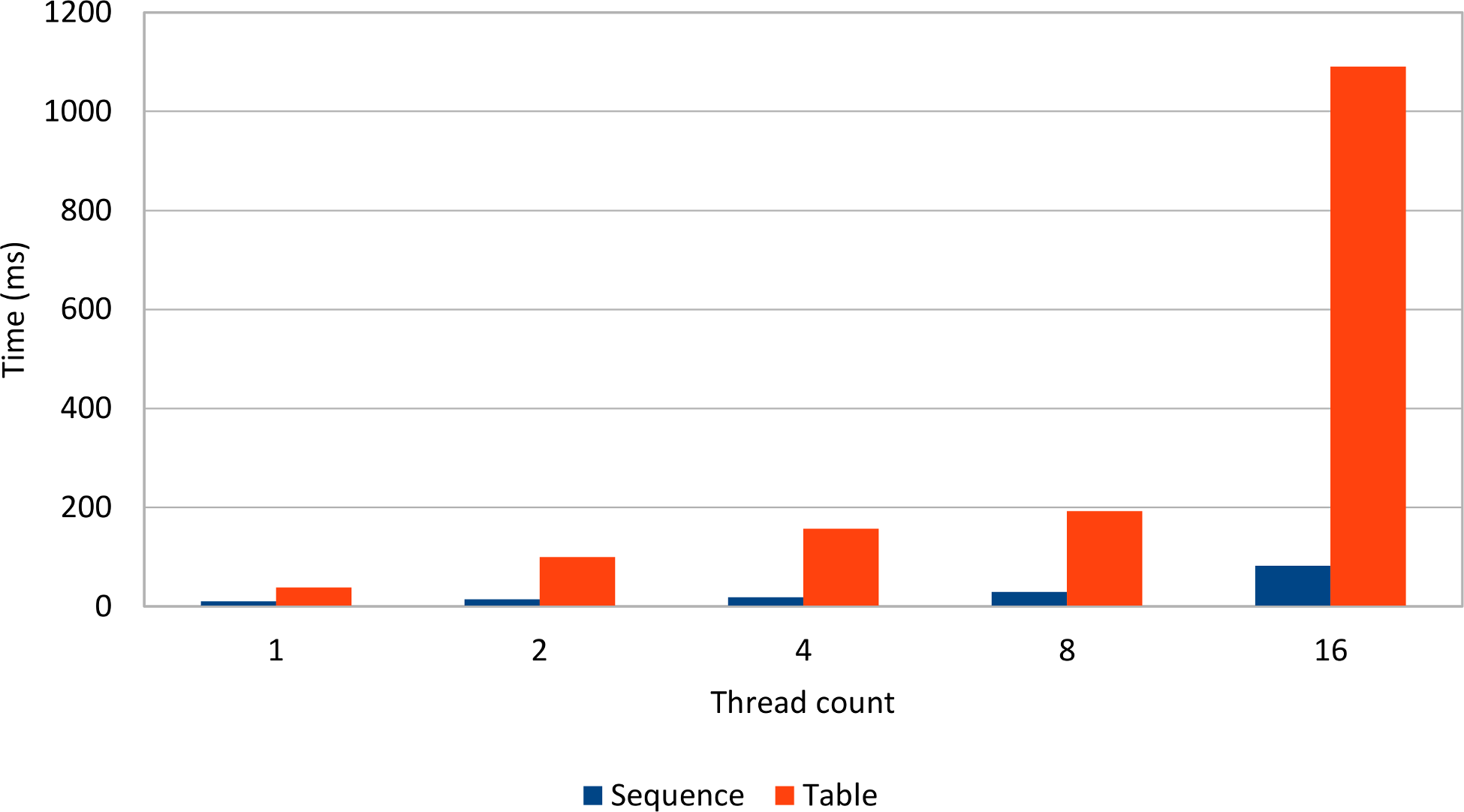 The performance impact of the TABLE generator becomes noticeable in highly concurrent environments, where the row-level locking and the database connection switch introduces a serial execution.

The row-level locking solution employed by the TABLE generator incurs a serialization portion which hinders concurrency, as explained by the Universal Scalability Law (which is a generalization of Amdhal’s Law).

If you want database portability, you don’t really need the TABLE generator. You can mix the SEQUENCE and the IDENTITY generator as explained in this article.