In this article, I’m going to show you analyze a Java application using Lightrun so that you can discover various performance tuning improvements you could apply to your current Java application.

In this previous article, I explained what Lightrun is and how you can use it to inject dynamic logs, capture runtime snapshots, or add dynamic metrics.

In this article, I’m going to use Lightrun as an alternative to my JPA Association Fetching Validator.

When fetching a JPA entity using Hibernate, a LoadEvent is triggered, which is handled by the DefaultLoadEventListener, as follows:

The DefaultLoadEventListener will check whether the entity is located in the current JPA Persistence Context or first-level cache. If the entity is found there, then the very same Object reference is going to be returned.

This means that two consecutive entity fetch calls will always return the same Java Object reference. And this is the reason why JPA and Hibernate provide application-level repeatable reads.

Now, this process can happen when calling EntityManager.find, when traversing an association, or indirectly for the FetchType.EAGER strategy.

The JPA Association Fetching Validator article explains how you can assert the JPA association fetches programmatically. This tool is very useful during testing, but it’s less practical for consultants who have to examine a production system for the very first time.

For instance, let’s take an example from the Spring PetClinic application:

So, if we load 2 Pet entities while also fetching their associated owner associations:

So, why there were 3 queries executed instead of only 1? That’s the infamous N+1 query issue.

While you can detect the N+1 query issues using integration tests, sometimes you cannot do that because the system you were hired to analyze is deployed into production, and you haven’t seen the source code yet.

In this kind of situation, a tool like Lightrun becomes very handy as you can simply inject dynamically a runtime snapshot that’s recorded only when a given condition is met.

The first step is to add a runtime snapshot in the loadFromDatasource method of the DefaultLoadEventListener Hibernate class. 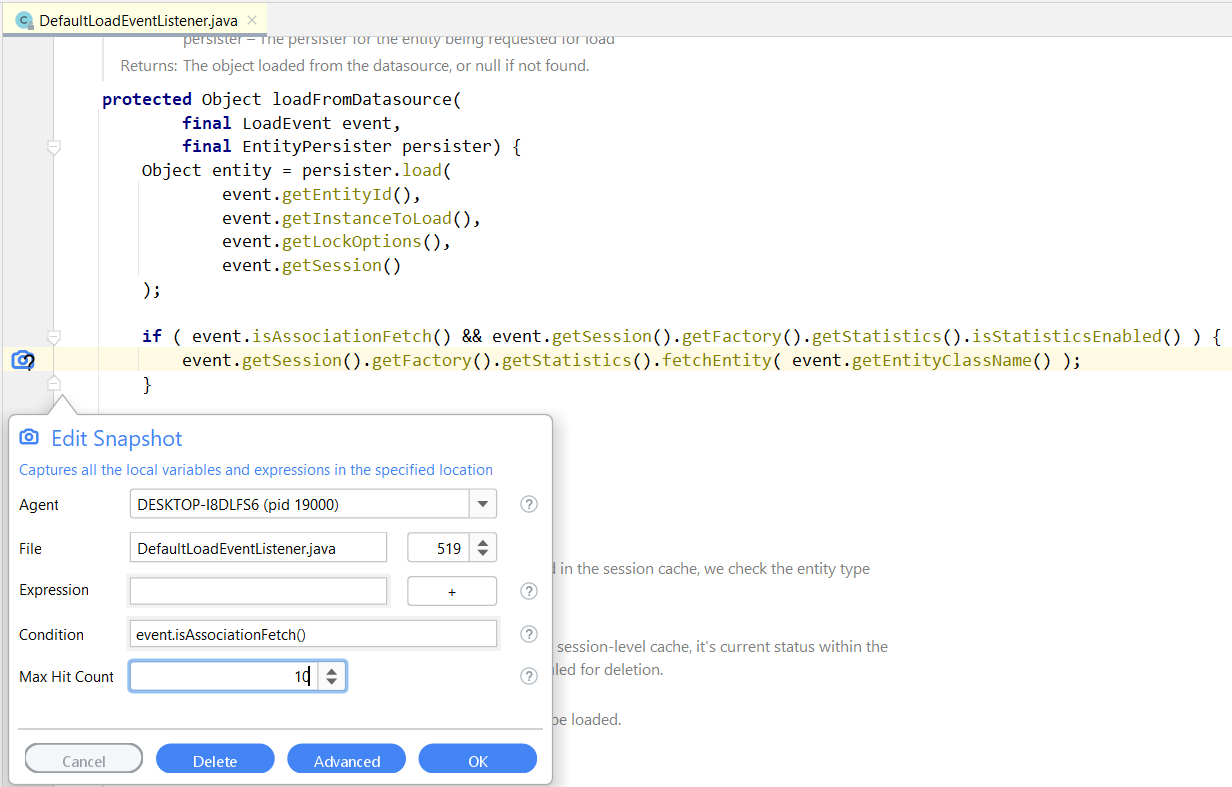 Notice that the snapshot is recorded only of the isAssociationFetch() method of the associated LoadEvent returns true. This condition allows us to capture the secondary queries executed by the N+1 query issue.

Now, when loading all the pet owners with the last name of Davis, the PetClinic application executes the following SQL queries:

And when checking the Lightrun Snapshot console, we can see that two records have been registered:

The first snapshot looks as follows:

Notice that the two snapshots correspond to the secondary queries executed by the Spring Petclinic application due to the extensive use of the FetchType.EAGER strategy.

While you can detect these N+1 query issues during testing using the JPA Association Fetching Validator, if your task is to analyze a runtime system you’ve never ever seen before, then Lightrun is a great tool to discover all sorts of issues and the reason why they happen.

Especially because Java Performance Tuning is one of the most common reasons I’m getting hired, Lightrun is a great addition to my toolset.