How to become a Java Champion

That’s how much time it took me from the moment I started this blog until I became a Java Champion.

In this article, I’m going to show you what I did so that, after 1515 days, I became the first Java Champion from Romania.

Starting a blog is definitely one of the best decisions I’ve ever taken. Sharing knowledge is a two-way street. Not only that you are helping others get a better understanding of a certain topic, but writing helps you as well. Expressing thoughts does not always come easy, and writing is a very good way to practice this skill.

Now, starting a blog is the easy part. Keeping pace is the most challenging part of writing. In 4 years, I manage to publish 240 articles. So, every week, I try to write at least one blog post.

In the first year of blogging, the traffic was rather modest, as you can see in this report. In the firsts three months, I was thinking of abandoning it because I couldn’t see enough engagement to justify the effort.

However, I kept on writing and the traffic started to increase steadily. From 1200 page views in October 2013, four years later, the monthly traffic has increased to more than 160,000 page views.

If you focus on writing good content, eventually, traffic will come as well.

In May 2014, I started answering questions on StackOverflow. Four years later, I managed to answer over 1300 Questions, mostly about JPA and Hibernate and got a 41k reputation. 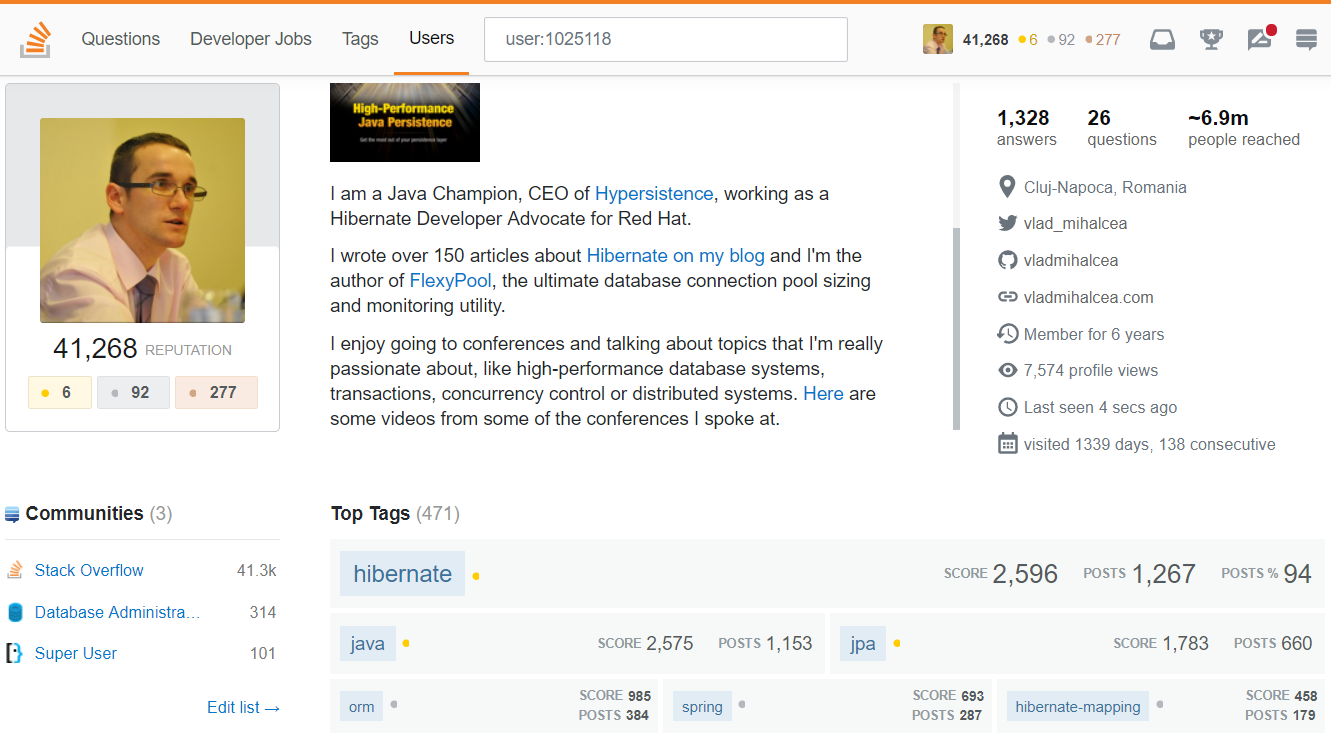 It was due to my blog and StackOverflow contribution that I got a Developer Advocate job for the Hibernate project at Red Hat.

I started using Git and GitHub with my blog since I wanted to share the unit tests I use for my blog posts. In the spring of 2014, I was working as a Software Architect, and we needed to deploy one of the largest real-estate platforms in Finland.

Prior to the first release, we needed to configure all the connection pools used by the enterprise system we were developing. Because I couldn’t find anything to help us, I started FlexyPool. That’s when I officially started to contribute to an open-source project, and this allowed me to get a better perspective of what it is like to create a software library that’s used by thousands of projects all over the globe.

Three years later, and I have multiple projects to share on my GitHub repository: 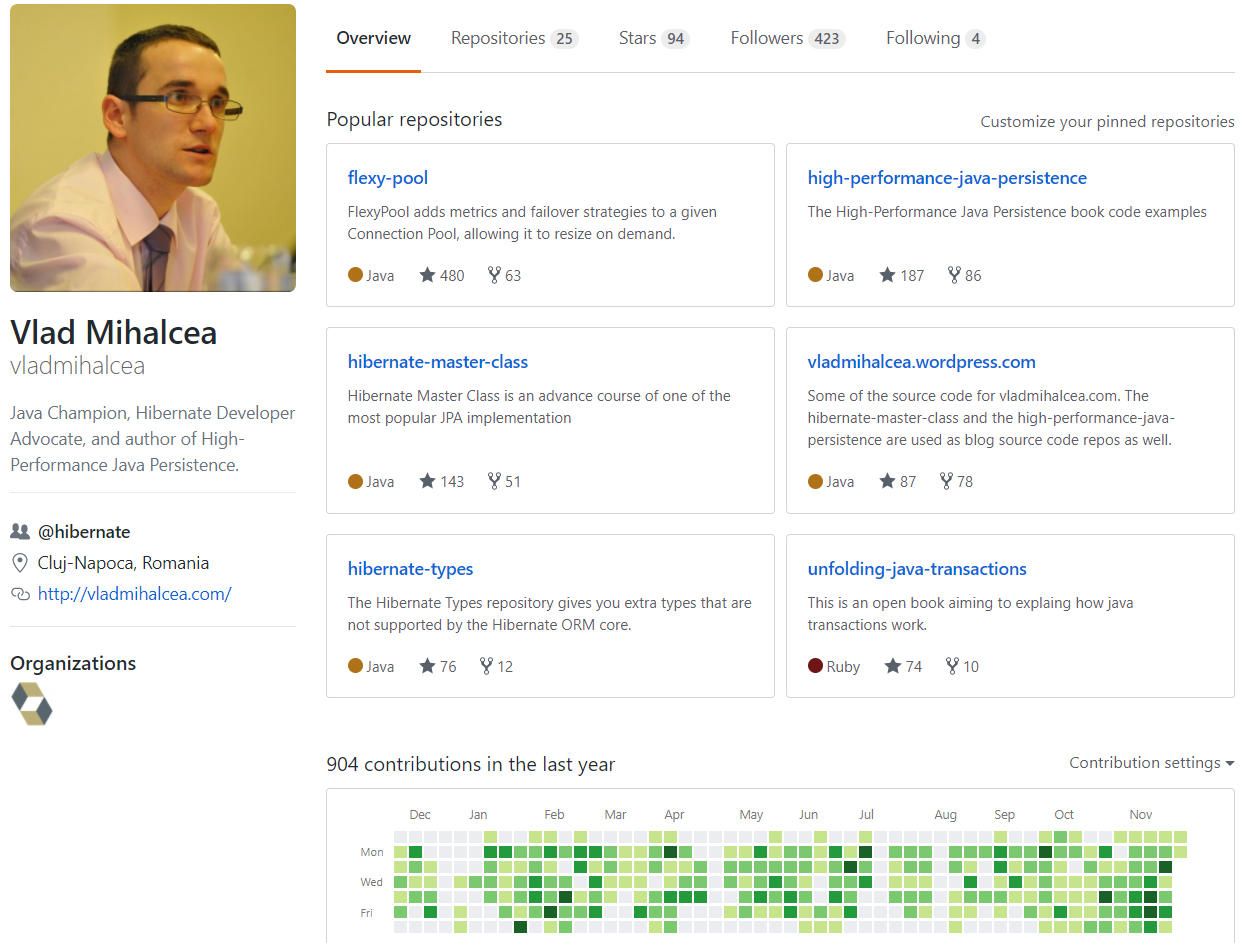 The latest addition to the list of open-source projects I’m involved with is the hibernate-types framework, which allows you to use JSON, ARRAY or many other custom Hibernate Types that are not supported natively by Hibernate ORM.

In June 2015, I started writing High-Performance Java Persistence. It took more than a year to get it done, but judging from the testimonials I got on Twitter or on Amazon, I’m glad I did it.

When I was writing the book, I realized that blogging was just warming up. Writing a book is much more intense and time-consuming. However, it is the best way to aggregate all the knowledge associated with a given topic, like high-performance data access logic.

And because one thing leads to another, the book allowed me to gather enough material to start offering an on-site training about High-Performance Java Persistence.

In June 2014, I attended TopConf Bucharest. That was the first software conference I was ever attending, and it was then that I decided I wanted to be on stage as well.

In the spring of 2016, I spoke at Voxxed Days Bucharest and Devoxx France. Afterward, I managed to speak at Java Zone Voxxed Days Zürich, Belgrade, Cluj-Napoca, and do a workshop at CraftConf.

It was during these software conferences that I had the opportunity to meet lots of Java experts who are actively involved in shaping the Java ecosystem.

I left the best part for the end. Sharing knowledge via your blog, books, StackOverflow answers or open-source projects helped me make many friends, some of which are Java Champions.

Therefore, I am very thankful to Lukas Eder, Rafael Winterhalter, and all the other Java Champions who voted for me. Some of them, I met during conferences, while the others, I’m looking forward to meeting them at the next events we will be speaking.

If I hadn’t started this blog four years ago, it’s unlikely I would have ever been nominated to become a Java Champion.

When I started this blog, I wasn’t thinking that one day, I would become a Java Champion.

All in all, I’m happy I embarked on this journey, and I hope that my achievement will inspire other Java developers to start sharing their knowledge.

2 Comments on “How to become a Java Champion”