Posted on September 30, 2021 by vladmihalcea

It was September 2013, and I had always wanted to start a blog but had never found the motivation to do it. If you keep on waiting for the right time to do something, that day might never come. Either you start right away, or you just keep on lying to yourself.

That day will never come:

- One day, I'll add some unit tests for this.
- I'll write the documentation later when I have some time.
- I'll start blogging or write a book after I finish this sprint or release.

Unless you start doing it now, you'll keep on lying to yourself. 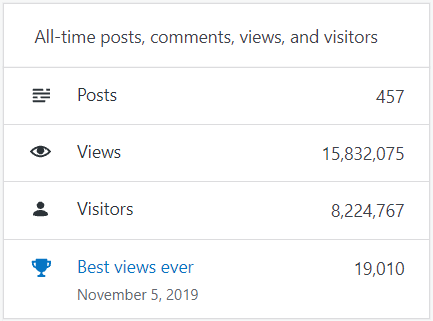 Over the past year, I invested more time into my social media presence, and it shows.

I managed to get over 35k followers on Twitter and over 22k on LinkedIn.

It was in 2020 that I discovered how amazing LinkedIn has got.

Whenever I see anyone making fun of LinkedIn pic.twitter.com/WXbtVrKyhR

In 2017, I released the Hibernate Types open-source project, which provides support for mapping JSON, ARRAY, Inet, Range, HStore, or YearMonth with JPA and Hibernate as well as utilities like the ListResultTransformer or the camelCase to snake_case naming strategy.

Over the past four years, the Hibernate Types project has been adopted by tens of thousands of projects, and now it gets over 1.15 million monthly downloads.

Over 1.15 million monthly downloads for the Hibernate Types project.

Thanks for using it and stay tuned for more awesome features!https://t.co/uWHE92V5ey pic.twitter.com/jfv10G5M7c

In 2015, I quit my software architect job to focus on writing the High-Performance Java Persistence book. Six years later, the book got a ⭐⭐⭐⭐⭐ rating on Amazon from 68 reviews.

After people told me they loved the book, I decided to create a 3-day training, which, each year, helps tens of companies all over the world to optimize the performance of their Java database application.

This year, I started running my High-Performance SQL training as a series of 2.5-hour workshops, and the result is outstanding.

In 2017, I started recording the High-Performance Java Persistence video course. It took me over three years to record and edit almost 11 hours of video lessons, but it was all worth it.

If you want to speed up your data access layer, my High-Performance Java Persistence – Mach 3 video course is surely going to help you achieve your goal.

In March 2019, I released the 1.0 version of Hypersistence Optimizer, a tool that allows you to scan your JPA and Hibernate entities, configurations, queries, and data access operations and suggest what changes you need to make in order to improve your application performance.

In 2021, I managed to release several versions that provide more and more performance tuning checks.

It was also this spring that JUG Lausanne organized an event where Cédric Delon talked about the advantages of using Hypersistence Optimizer on large enterprise projects. The talk is in French, so if you’re speaking this very beautiful language, then you are going to love this presentation.

Thank you very much for reading my blog and stay tuned for more awesome articles and products!