Imagine having a tool that can automatically detect JPA and Hibernate performance issues. Hypersistence Optimizer is that tool!

In this article, we are going to see what is the best way to map the entity version property with JPA and Hibernate.

Most often, we overlook the basic entity type mappings, focusing more on associations or querying options. However, basic types can also have a significant impact on application performance, especially if the type in question is used in many entity mappings.

The best way to map an entity version property with JPA and Hibernate with @vlad_mihalcea https://t.co/EoKKHozMf8 pic.twitter.com/kgL08pgtOB

As I previously explained, the entity version property is used by the Hibernate optimistic locking mechanism to prevent lost updates.

Notice that the version property is mapped as Java int primitive. On the database side, the version column is of the type integer:

The numeric column types act like circular buffers as, when overflowing, the transition is done from the maximum value to the minimum value.

For example, considering we have persisted the following Product entity:

Now, when fetching and changing the Product entity:

Hibernate increments the version column value, so now the next value is -2147483648:

So, the value overflows when reaching the maximum value.

If you want a detailed explanation of how the entity version property is used by the Hibernate optimistic locking mechanism when the read and write happen either in the scope of the same database transaction or in separate transactions and JPA Persistence Contextx, then you should definitely read this article.

Therefore, the version column effectiveness lies in the probability of not finding the same entity version while the row itself has changed due to concurrent modifications.

So, theoretically, there can be so many changes in between the entity read and write so that, by the time we write the entity back to the database, the values have rotated to the very same value we read from the database.

In the case of an integer column, we can accommodate 4294967294 changes in between the read and the write.

But, that’s way too much.

Even if we allow 100 concurrent database transactions and all these transactions modify the very same database record because only one transaction can modify a record at a time, the probability of reaching the same value due to overflowing is given by the average transaction time. 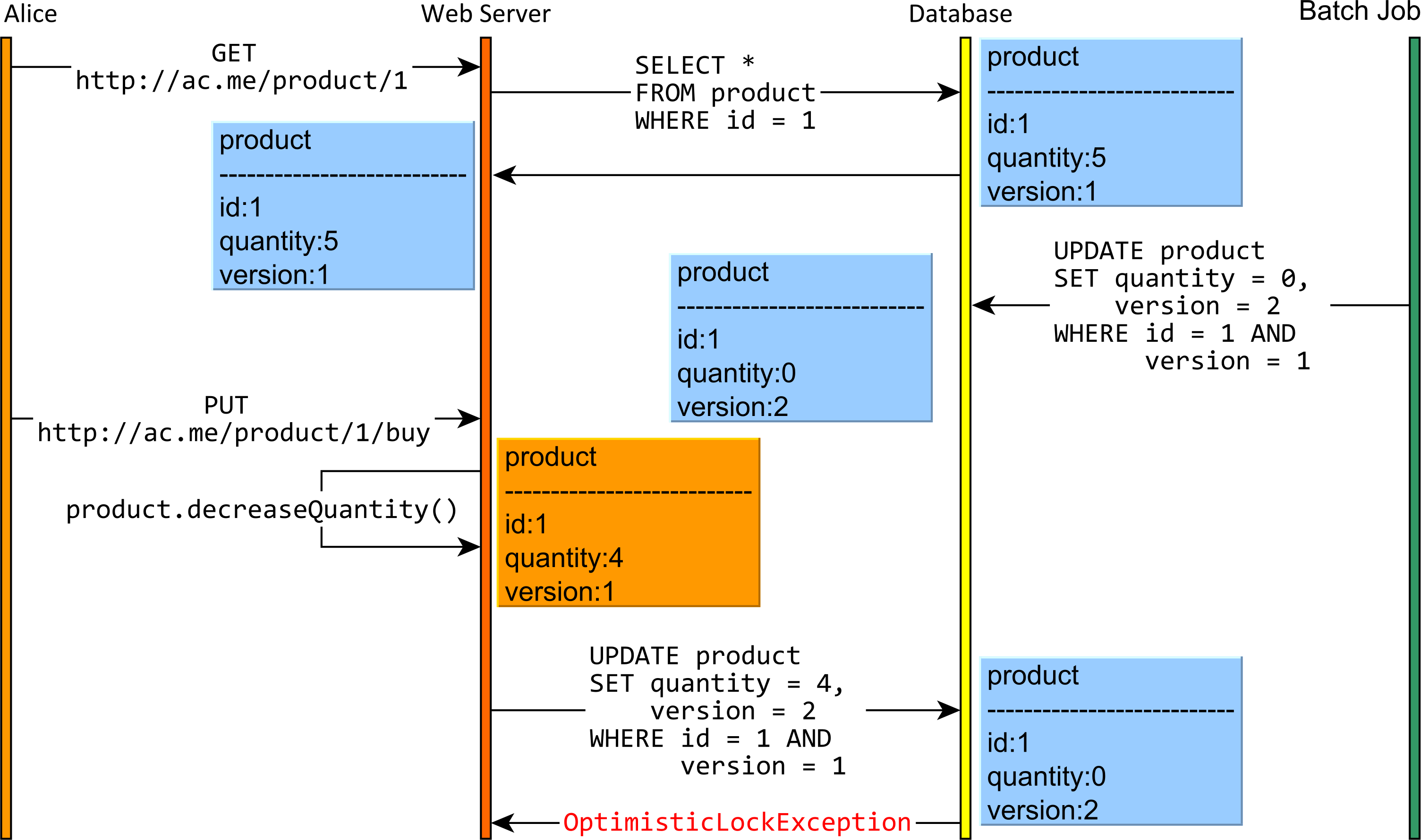 The user’s think-time might be limited by the HTTP session timeout period anyway, and even for batch processing tasks, the time between a read and a successive write will not take very long, even if retries are being employed.

Therefore, we can choose a short or smallint column type for the version property:

The short column takes 2 bytes and accommodates 65,536 possible values. So, with an average transaction of just 10 ms, it will take 655 seconds before we hit the very same value we read previously, but which has been changed 65,536 times ever since.

However, in reality, the average transaction time is higher than 10 ms, and not every transaction wants to modify the same record we have previously read before. Therefore, the time it takes to modify an entity 65,536 times will take way more than 655 seconds.

Using a short primitive type for the entity version property and a smallint column type on the database side is usually a much better choice than opting for an int or a long property.

By using a more compact column type, we can save up space both on disk and in memory. This way, the database server can accommodate more entity records per in-memory page, so more rows can be ultimately stored in the buffer pool.

So, the best way to map an entity version property with JPA and Hibernate is to choose the right column type based on how often the entity is modified. Most often, a smallint type is sufficient. If the entity is rarely changed and the database supports a tinyint column type (e.g. MySQL), then you should choose a byte version type which will still allow you to benefit from the optimistic locking mechanism while only adding a one-byte overhead to the underlying row storage.